Coffee is one of the most popular drinks in the world. It has been around for centuries, and there are many people who drink it daily without any side effects. However, some people wonder if coffee consumption is safe during pregnancy or while nursing a child. This article will explore these questions to clarify whether pregnant and nursing mothers should consume coffee or not.

You’re jumping for joy at the prospect of welcoming a new kid into the world one minute, and then you hit a wall – caffeine withdrawal. Any expecting mother knows how difficult it is to avoid certain things while pregnant, especially when the excitement of pregnancy brings with it a long list of precautions: meals, beverages, chemicals, and activities that you “must” avoid at all costs or risk harming your unborn baby.

Before we fall for all of the pregnancy scare tactics, it’s time to get down to business. Yes, doing everything in your power to keep your safe infant while on the road is essential, but some moms may find pregnancy impossible due to a food or beverage ban.

So, what’s the answer? Is it possible to drink coffee while you’re pregnant, or is it actually the devil’s brew?

When you start looking into how much coffee, if any, you can drink while pregnant, the conclusions are inconclusive at best. Sigh. It’s possible that resolving the problem will require more work than originally anticipated.

According to the American College of Obstetricians and Gynecologists, mild caffeine use (less than 200 mg/day) does not cause miscarriages or preterm birth. The March of Dimes adds their two cents (yuk yuk) by suggesting that pregnant women drink no more than 200 mg of caffeine each day. Depending on how you prepare it, a single 12-ounce cup of coffee will provide the necessary quantity.

Many mothers are concerned about coffee while pregnant because of a 2008 study that revealed that women who consumed 200 miligram or more of caffeine daily had a 2.5 times higher risk of miscarriage than the women who did not drink it.

However, a study published in 2016 again confirmed the findings, showing that greater maternal caffeine intake was linked to an increased risk of pregnancy loss. Although the writers stated that the results were inconclusive, reducing caffeine intake is also suggested.

Critics of the research claim that it was flawed because the researchers did not consider how the coffee was prepared or what was ingested. A heavier French roast, for example, would be considerably more powerful than a typical weak cup of American coffee that may be prepared with cream and sugar.

As you can see, there is a lot of disagreement regarding whether or not caffeine is harmful during pregnancy. It’s critical to maintain your baby and yourself healthy while lowering any disruptions to your routine. We’re now back to the subject of moderation.

The FDA issued recommendations for pregnant women to limit caffeine intake in the 1980s based on findings from research where pregnant rats were given caffeine, which resulted in adverse fetal effects. Despite this, the amount of caffeine consumed by rats in the study was excessive, with 50 to 70 cups of coffee each day for a 130-pound adult at best.

Pregnant women may make a sound judgment by doing their research based on the information presented above, as well as consulting with their doctor. In most situations, low to moderate consumption of all caffeinated things at up to 200 mg per day does not cause any problems.

But we can’t put down the coffee yet. How much coffee can you drink after your kid is born when you’re breastfeeding? 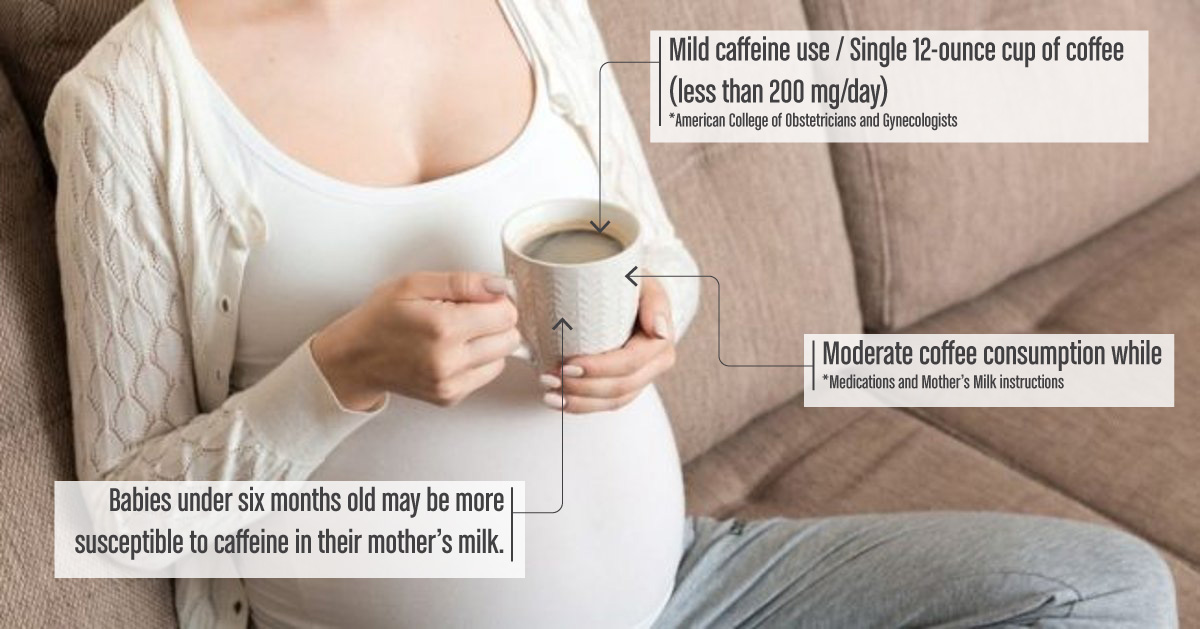 Researchers discovered in a Brazilian study of 885 newborn babies born in 2004 that although infants of mothers who consumed considerable amounts of caffeine appeared to wake up more often at night than infants of moms who didn’t drink much coffee, the difference was minor. According to the researchers, caffeine consumption during pregnancy and breastfeeding did not have a detrimental impact on three-month-old infants’ sleep.

To get down to business, Kelly’s Mom once again encourages coffee in moderation. Babies under six months old may be more susceptible to caffeine in their mother’s milk, particularly if the mother did not ingest any throughout her pregnancy.

If your baby is caffeine sensitive after breastfeeding, you might want to reduce coffee intake and increase it as the infant matures. However, moderate coffee consumption while breastfeeding is perfectly safe and is classified as a Lactation Risk Category L2 according to the Medications and Mother’s Milk instructions.

When it comes to caffeine consumption as a pregnant or nursing mother, you need to consider more than simply your cup of coffee. Caffeine may lurk in unexpected places, such as tea, diet soda, chocolate, and even coffee ice cream.

Picking the Right French Press for you

What do you think? Cancel reply